First of all, it seems with the Iron Man movie I am back to getting a lot of comments on him on my arm. I flew to Boston last week and had a chat with the guys at the security checkpoint and then a 13 year old kid took a pic with his phone and then gave me the little "chest-tap and peace out" gesture as he got off the tram. Then in Boston a 14 year old girl also took a pic with her phone.

So, finally, last night it was back to get more work done. I didn't realize that it had almost been a year since the last bit was done. In the meantime my artist switched to a different, but actually closer, location. Therefore, all new recommendations:

Need a tattoo? Call Jason Kelly at Ink and Dagger Tattoo Parlor in Decatur, GA. The new spot is really amazing, sylish and clean and new, all the things you probably don't expect from a tattoo parlor.

On with the photos:
( Collapse )

Playing tonight at the Lizard Lounge in Cambridge tonight at 10:30 tonight. Come out if you can!

I had another choice this week but it can't be embedded. Screw you, Universal Music Group! So, instead, here's my favorite video from high school.

The Eels - Cancer For the Cure

Why, yes, Iron Man DID fucking rock. Thanks for asking! 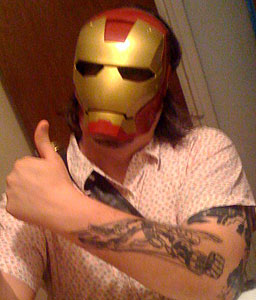 I may as well update, I know I haven't in a while and more has happened in the interim than usual.

zeppo's job has been averted. I don't know whether she will post about it or not (probably not), but basically, people in power who were being asked to remain made it a condition that she be retained as well.

I set myself up with a manager a few months ago. It's been her belief that I would do much better in the northeast, where she's based, than I do in Atlanta, a sentiment I suspect is true. But I explained we just bought 50 acres here last year, so we're really not going anywhere at this point. She offered to put together a backing band for me in Boston if I would be willing to travel there as much as I might be able. So, that's what we've done. The even odder aspect of it is that Michael Lorant (Big Fish Ensemble) is the drummer of said backing band; the Michael who when he still lived here played on my first two records and live for a few shows. So, two weeks ago I travelled up to Boston and rehearsed with them, as up to that point they'd been practicing without me based on demos I'd sent. The first run through was fine but not inspiring, the second was a bit of a revelation. Not that it's a wild left turn, but it is a different sort of sound and I think I really like it. It involves the realization I had a few months ago about how my music sounds and how I actually write and it has totally opened up things for me in a surprising way. So, where does it lead? I have no fucking idea. Except, hi, Boston, I'll see you June 14th at the Lizard Lounge.

Even apart from that music has gotten busy for me at the moment, between the Arts and Sciences doing a few shows and also the imminent rehearsal of another singer's backing band that I joined. All this and I still don't know for sure if I want to be doing music. Maybe I just won't ever know?